Most businesses know what a challenging process of planning an application can be. It’s not only about the purpose or looks of the app. The issues start much earlier when it’s time to choose a building approach. The right choice enhances your chances of success, recognition, and loyalty from the customer. However, choosing such a platform takes experience and practice.

After all, there are no good or bad options when looking at native vs cross-platform vs. hybrid app development. They can all be strong options depending on the nature and purpose of the app, including a company’s budget, deadline, desirable exposure, and resources among other criteria. Therefore, making the right decision is rather a matter of choosing the most relevant approach. To do so, one needs to examine each of the options up close.

We have prepared a detailed analysis of each option, including their purposes of use, best-fitted scenarios, and main characteristics. Hopefully, this guide will help make your choice easier in the end.

Native app development focuses on building a single application per specific operating system. Thus, applications for different platforms are done separately, using different languages, native to the systems they will work on (i.e. Swift for iOS).

As a result, businesses end up with two applications – similar in their looks and functions, but different on the inside. Native apps ensure more advanced interactions due to their responsive nature, and ability to access systems’ resources, features, and other elements. 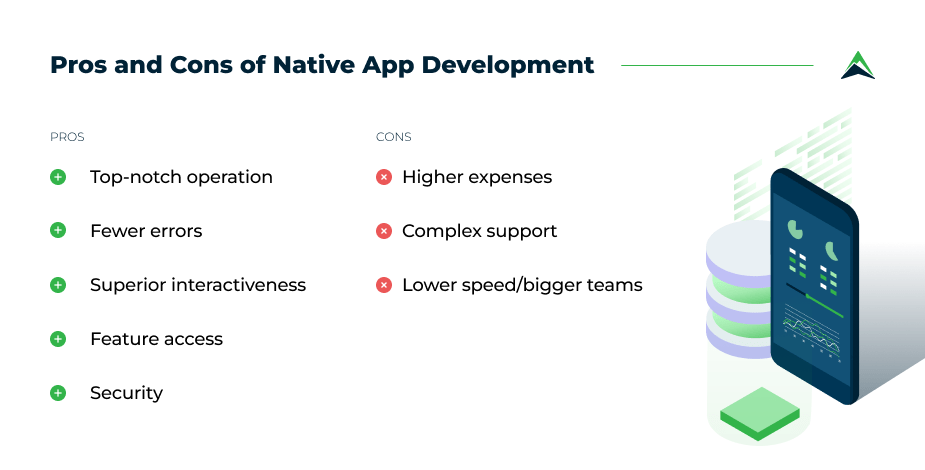 Reasons to create a native app

Most businesses may be tempted to go native at first glance at its advantages. However, it’s not always the best way to consider budget and time issues. Thus, clear limits in both these areas don’t go alone with native development.

For example, a larger team is required to complete the work under a short deadline. Yet, such a team also assumes higher costs. So, not everyone can afford, or frankly, need to go with this style anyway. Fortunately, a simple application with fewer functions and user interactions can do just fine with other options.

On the other hand, a business in a competitive industry will certainly benefit from a faster, more convenient, and more complex application. Such advantages enhance one’s chances of competing alongside other products. In such a case, one application can be first built for a single platform in order to gather insights and feedback.

Cross-platform apps development is exactly as it sounds. Here, developers work in HTML and CSS, using JavaScript for logic and interactions. Hence, cross-platform apps all have the same foundation, but later they get adapted to each platform via special building tools. Such an approach allows the final product to function on all operating systems. It means creating reusable code that can be easily shared and applied to any operating system.

Overall, such an app will feel and perform just like the original one, with just a few limitations in working processes or design. Developers will have to bypass certain difficulties, reduce some functions or cut back on extra features to ensure flawless performance. Still, any cross-platform development will require some percentage of the system’s original code in order to fit in best. 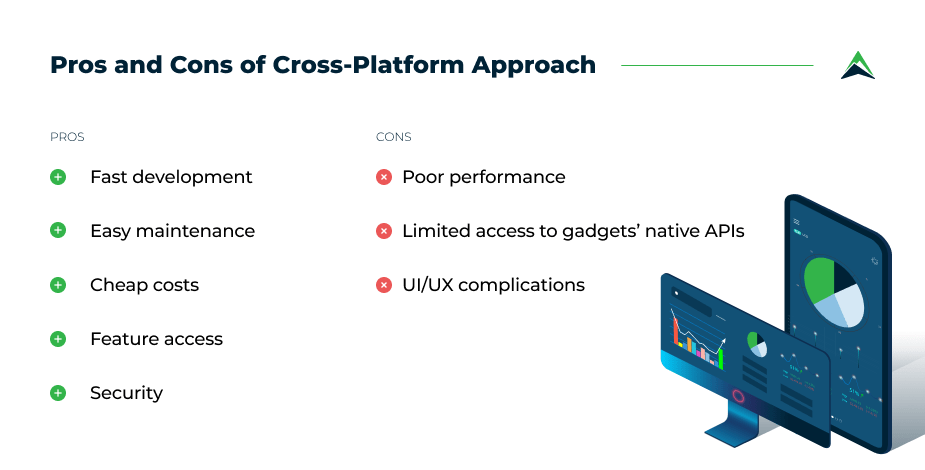 When comparing cross-platform vs native approaches, businesses usually start from their time and budget limitations. Of course, the given approach is often more convenient. Hence, if a business is on a tight deadline and needs to address a larger audience simultaneously, building cross-platform mobile apps is just the most reasonable and budget-friendly solution. In addition, the given option gives more room for testing different ideas and strategies.

However, this approach may not fit if an app needs access to numerous platforms’ features, or rely on complex functionalities to work.

Hybrid apps combine some features of the aforementioned approaches. In other words, it is a middle ground in the app-building process. A hybrid app’s code also relies on the same web languages. Yet, further, it is wrapped in native plugins, allowing the final product to access native features across different platforms. Hence, such applications can function and look similar to native apps. Still, they may fall behind in interactions and navigation.

A business may save a lot of time by choosing to build a hybrid app. It is the fastest approach that doesn’t require much skills or experience. Hence, it’s easier to find developers and build a product on short notice, shortening the delivery time to the market.

It’s also a good choice when you plan to advertise both an application for mobile and web purposes. In fact, businesses with a web page or application can easily convert that code into an independent application to offer in an app market.

However, this approach isn’t perfect for complex products with difficult functionalities or heavy reliance on platforms’ native features.

Any business wants its applications to be equally appealing, high-performing, and functional for users across all platforms. However, it is the smaller goals and limitations businesses have to account for when deciding on a development approach.

For one, each business has prior needs to consider, including, but not limited to

These criteria should determine your priorities.

Thus, a complex application with numerous features and functionalities can flourish only with a native approach. However, it will also require long-term planning, an extended budget, and a skillful team of developers.

On the other hand, the two remaining options are faster to develop and market. Hence, it can give businesses an upper hand when competing with others. These products are also cheaper to build.

Though, app security will be the strongest in native apps as they come with multiple features to ensure the safest, most protected usage. And finally, the same approach is also best for the personalization and customization of apps. Hence, native code ensures a better user experience and a more appealing interface. Still, the differences among approaches may go unnoticed by users, depending on the nature of the app and developers’ efforts.

Each platform can ensure a reliable, working, and popular app in case of choosing the right approach for the task. Hence, it is not just about choosing Native, Cross-Platform, or Hybrid. It is about following your business requirements, needs, and agenda. In addition, one must include audience expectations and general market demand for a certain product.

So, contact our team at Eastern Peak to further discuss your business needs and find the perfect solution to your queries.

What is the difference between cross-platform and native app development?

Native applications are designed separately, using different languages, to work on each operating system. On the opposite end, cross-platform apps are built with a single code to work across different platforms.

What is an example of a native app?

WhatsApp, Spotify, Waze, Pokemon Go, and SoundCloud among many others are popular examples of native applications.

What are the advantages of native apps over hybrid apps? 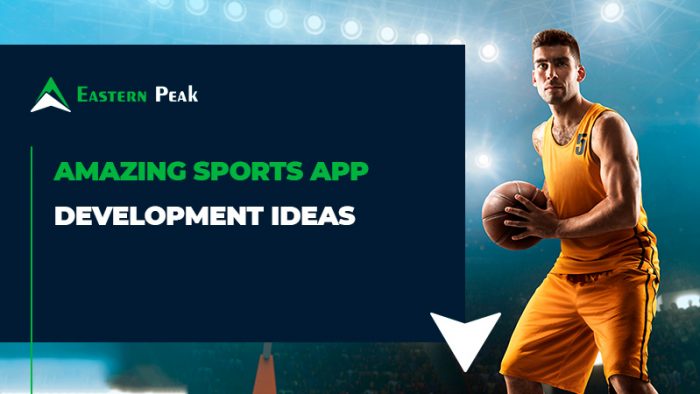 The sports industry has always enjoyed popularity among millions of people. In the age of free markets, this sector is ... 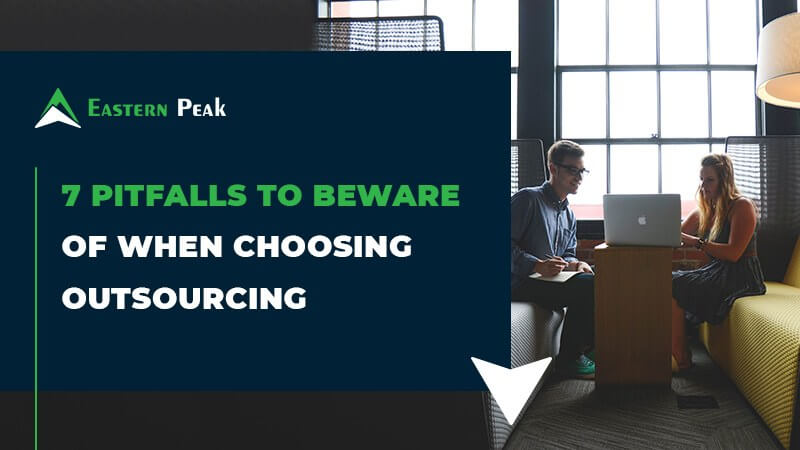 The article was updated on November 29, 2022. In recent years, outsourcing has become a common and accessible strategy for ...