How to Develop an Anonymous Social Network? Case Studies and Expert Advice

With social and messaging being the fastest growing app category, social networks development remains a thriving and highly profitable market. Yet, building another Facebook or Twitter makes little sense, taking into account the existing user base and adoption of these social media giants.

In such an extremely saturated market, anonymous social network development represents a great opportunity to stand out among the competition. Having been around for a while, the concept remains appealing to the major audience, offering the benefits of free speech and self-expression.

In this article, we will focus on the current state of the market, from thriving leaders to major failures, suggest killer features to that can help you gain a competitive edge, and point out some of the main mistakes to avoid in anonymous social media app development.

So what do we know about user behavior online? The Internet transforms our perception of personal information and the way we treat it. Let’s look at some specific figures.

First, we see that users generally do not feel that they don’t have enough control over their personal information they shared online. In particular, only 13% of respondents in the US believe they have decent control over private messages, and 16% – over social media posts. 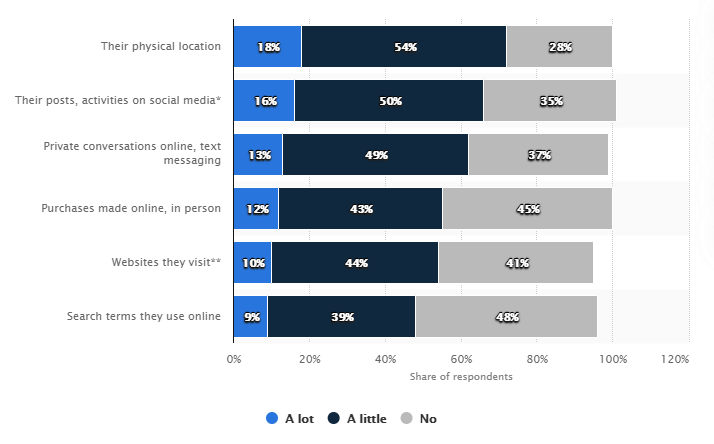 The vast majority of mobile users have concerns over private data usage online. 59% are not sure how their personal information is used, while 54% of respondents believe this data serves as a marketing instrument and can be sold by third parties. 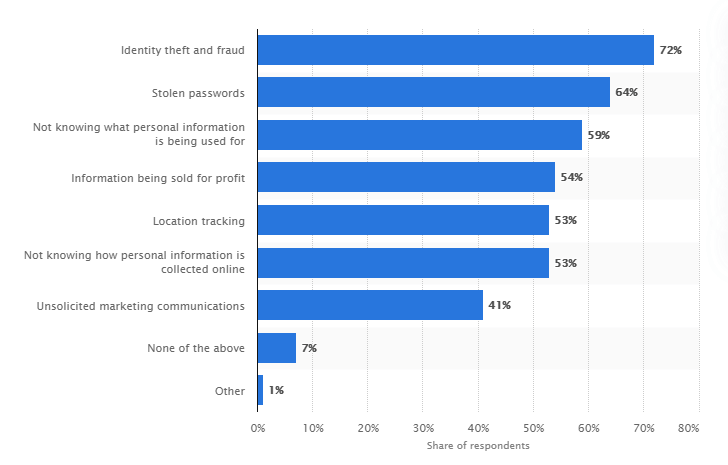 At the same time, 84% of the people that participated in the Consumer Privacy Survey conducted by Cisco do care about data privacy and 80% want to take action on data protection. 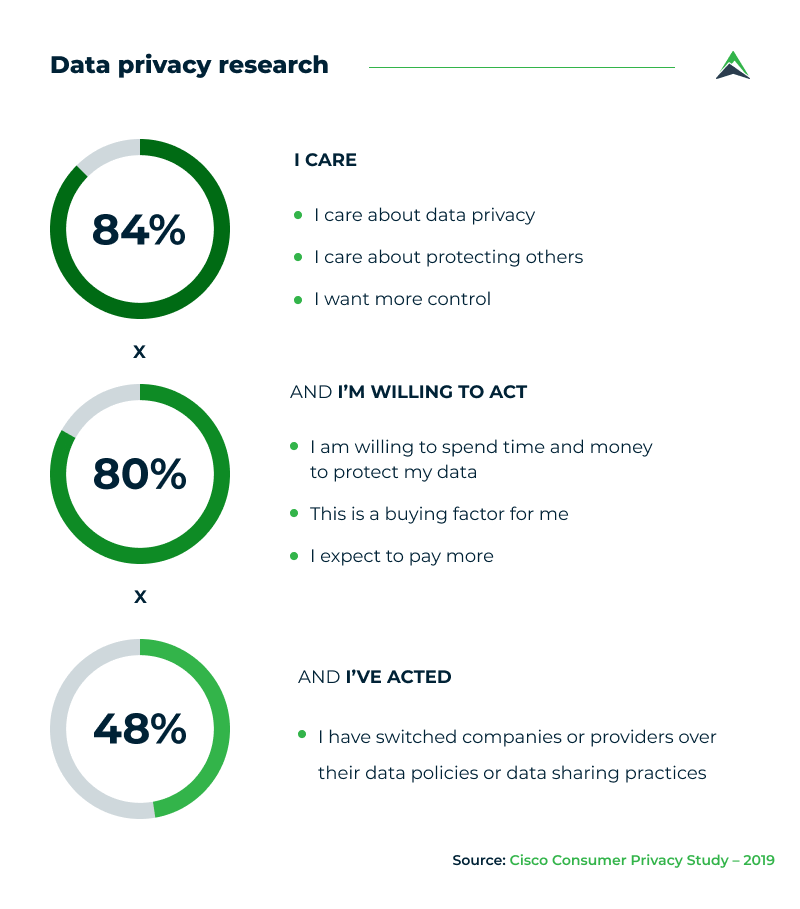 Anonymous social apps represent a safe place for people who prefer not to share certain thoughts openly with their friends and family, or who are concerned about privacy using traditional social media. Such apps allow users to speak freely about anything without being judged or bullied.

Now, considering all the misgivings around data privacy, what information do people prefer to conceal on the web?

There are two main types of anonymous social networks, depending on what exactly you want to keep secret:

The two types of anonymous social apps can be blended together or used within the same app: Anonymous social media apps can provide an opportunity to send direct messages to people nearby. 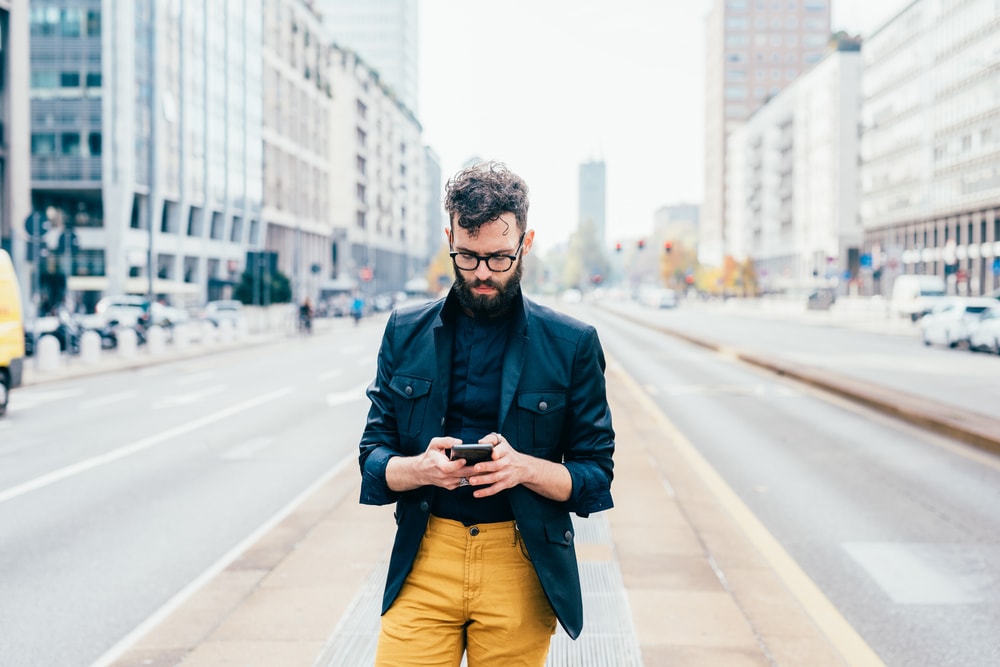 Anonymous apps are built to avoid any type of personal data mentioned above. It means no names, contact lists, and personal photos. So, how do users exist within such social platforms?

These platforms do not require a sign-up, which means you do not leave your email, name, date of birth, etc. Instead, users get a specific ID that identifies their persona only for that website. Or, if you use a particular device to get access to the website, you will get a token for identification. The more devices, the more tokens you will get.

These apps do have a sign-up: you only have to enter a password to get an ID. In some cases, users also have to provide their nickname but not their real name of course. 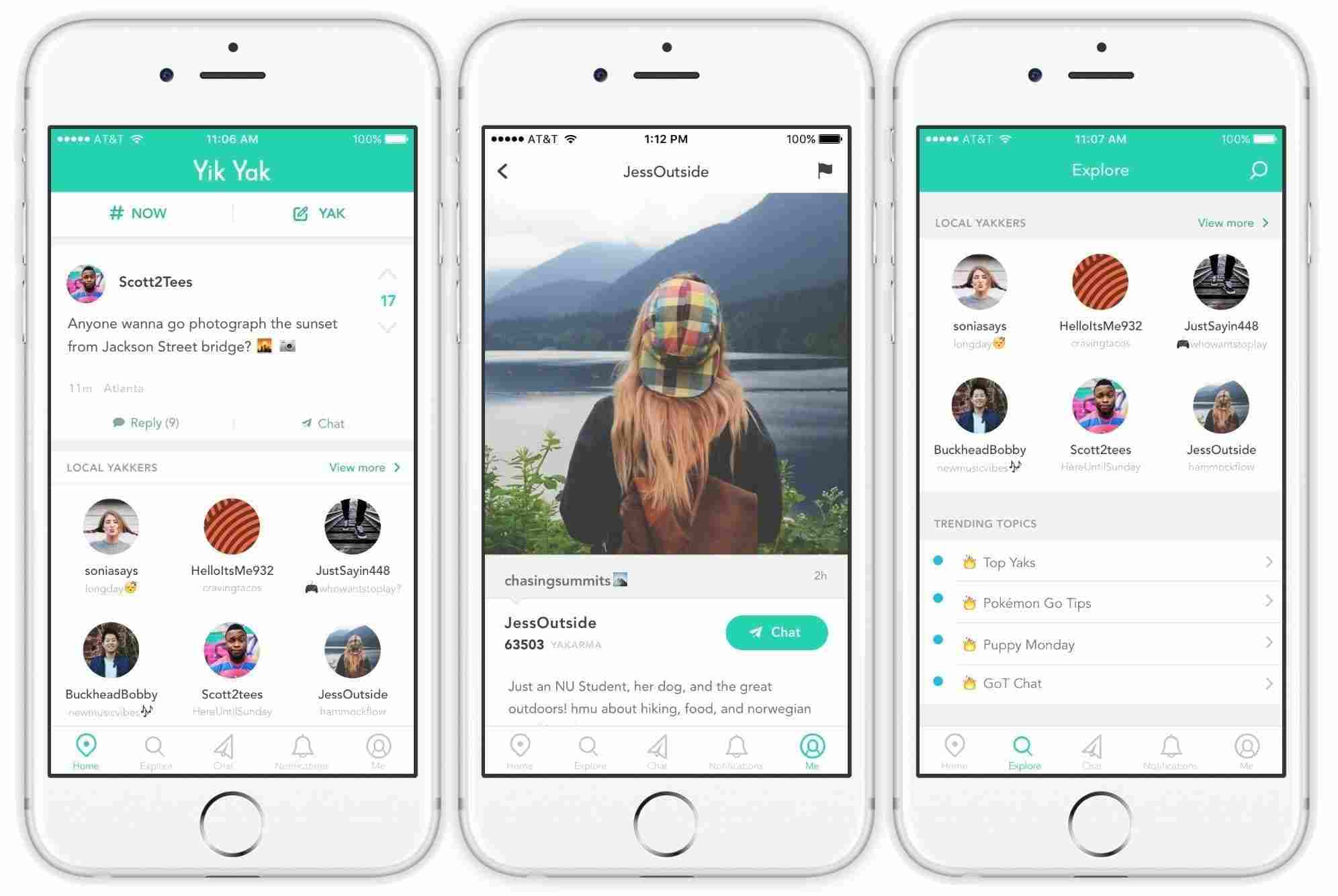 Yik Yak was one of the most popular anonymous social apps of all time. Initially designed as an anonymous Twitter-like network, the app found wide adoption among college communities in the US. The app relied heavily on geofencing, allowing its users to browse anonymous posts from people within a 5-mile (8 km) radius.

The main reasons for the app’s failure were: 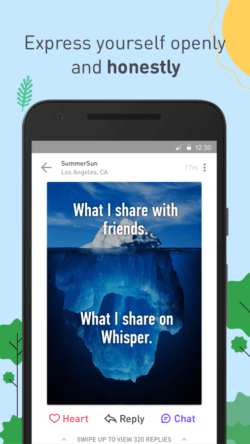 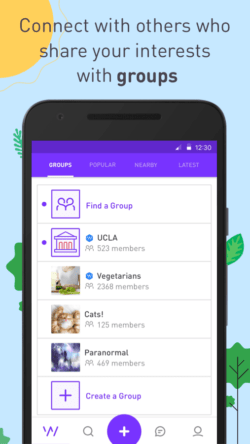 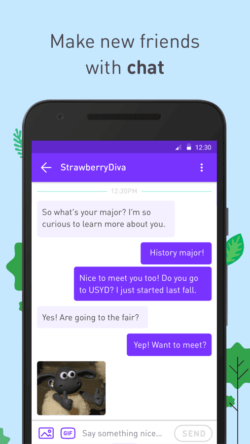 Dubbed the “media company of the future,” Whisper is another major player on the anonymous social media market. It allows its users to share anonymous content on various topics. The posts can feature an image and text or video. 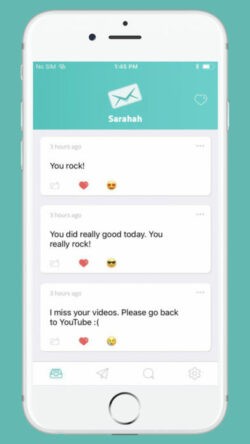 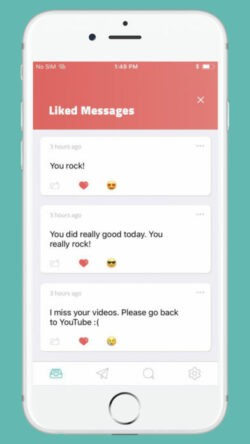 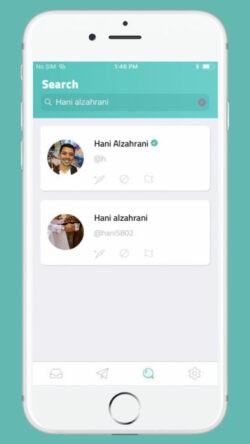 Sarahah (which means “honesty” in Arabic) is one of the latest hits in anonymous social media. The app was originally intended to serve as a place for people to share constructive anonymous feedback with their coworkers or managers.

However, the app found adoption outside of the corporate world, being featured among the top free apps in the App Store.

The app lets its users send anonymous messages to other people. Once you know a user’s name, you can send a message to any person within the app. There is no way to respond to such messages or find out who they are from. This, however is allegedly causing the same problem that killed Yik Yak – cyberbullying. 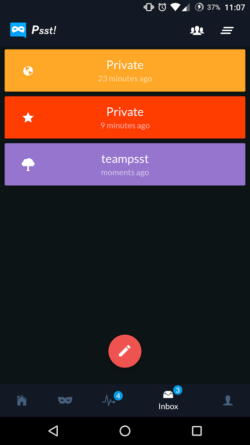 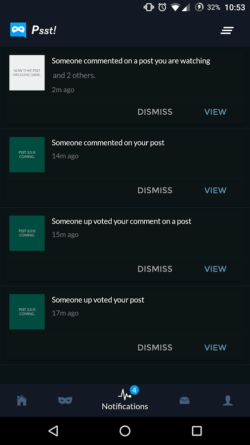 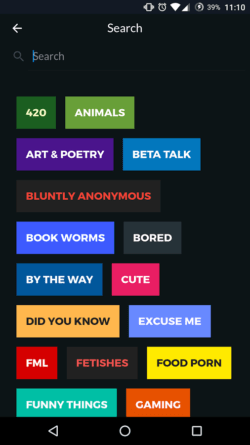 The Psst! Anonymous app blends both the social network and chat capabilities, keeping its users anonymous. You can share your secrets, opinions, and thoughts with other people using the app. The posts will be visible to the app community and can spur personal discussion in a one-on-one chat.

The messaging uses multiple layers of encryption, so it is totally safe. Moreover, all messages sent with the app are immediately deleted as soon as you read them. There are no logs and no opportunity to trace it back to the sender.

A secret sauce for anonymous social network development. How to gain a competitive edge?

Most anonymous social apps have a number of features in common. They provide some sort of user ID or allow users to create an anonymous profile, share various types of content (from text to images or even videos) as a direct/group message or public post.

Read more about the must-have features for a social media app:

How to make a social media app?

In addition to this, an anonymous social network has to offer a unique benefit or appeal to a certain user group to become successful.

Here are some fresh ideas on how to make your app stand out among the competition.

Using geofencing, you can restrict access to the in-app content for strangers, allowing the users to build private communities around schools, colleges, venues, or even small towns. Moreover, a user can join other communities or see local feeds depending on his/her current location (e.g. when traveling).

By creating a location-based feed, you allow the users of your app to see only relevant content, tailored to their interests. Thus, you will be able to engage your users into meaningful networking (although, anonymous).

Gamification features such as achievements and bonuses are great ways to build engagement and retain your users. Achievements can be unlocked through certain actions within the app (check-ins, likes/messages received, number of followers, etc.).

Another good idea is to allow users to share some sort of digital gift with each other. You can either develop some sort of in-app currency (points/coins that users will get as a reward for their activity) or allow users to buy the digital presents through in-app purchases. The latter can also be used as a great monetization strategy.

Anonymous social networks, due to the fact that they don’t require actual user info, can attract online “trolls” and bullies. That is why a good idea is to keep an activity record for every single user ID. In this way you can effectively identify and take down the accounts that violate your policies and laws.

In case the user account is tied to a certain device, the person whose profile was suspended won’t be able to reinstall the app and create another profile. 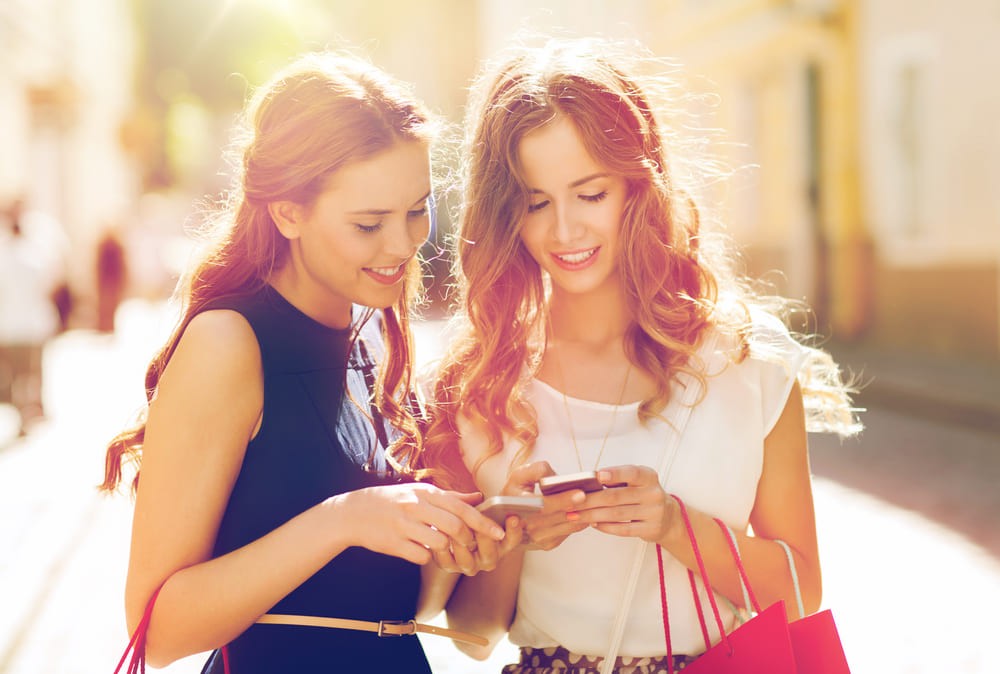 Similar to Snapchat or Psst!, (the apps mentioned above), you can set certain limitations for posts to add an appealing twist to your app. This can be self-deleting messages that disappear as soon as they are read by the recipient, or posts with a limited timeframe.

Moreover, disappearing content adds another layer to the security and anonymity of your users. Once the post disappears, it is deleted from your backoffice as well, so there is no way to trace it to the author.

If you don’t want to put geographical limits on your social network, you can target a certain user group, e.g. single parents, people with special needs, teen girls, etc. If your users have something in common, they will be more likely to build a powerful community within your app, and, as a result, find it useful.

Furthermore, targeting a niche audience when launching the app is always a winning strategy. It allows you to safely “test the waters” and perform the required adjustments to your product before going all in.

While social media app development may seem to be a low-hanging fruit, there are many things you should consider before starting the project.

Hiring an experienced and professional technology partner is a great way to ensure your future app meets the market standards and regulations. We at Eastern Peak have vast experience developing social networking apps.

Having helped over 50 startups and business from all over the world build software, we have accumulated the expertise that is required in order to find the solution to any complex problem, from building Uber-like application to building anonymous social network apps.

How to ensure security in anonymous social media apps

Security issues should become the center of your attention when you create an anonymous app. We run the risk of security vulnerabilities every time we use our smart devices, but users of the anonymous social network expect you to be extremely careful with the data you have in your hands.

This is what you can provide as a security shield within your app: 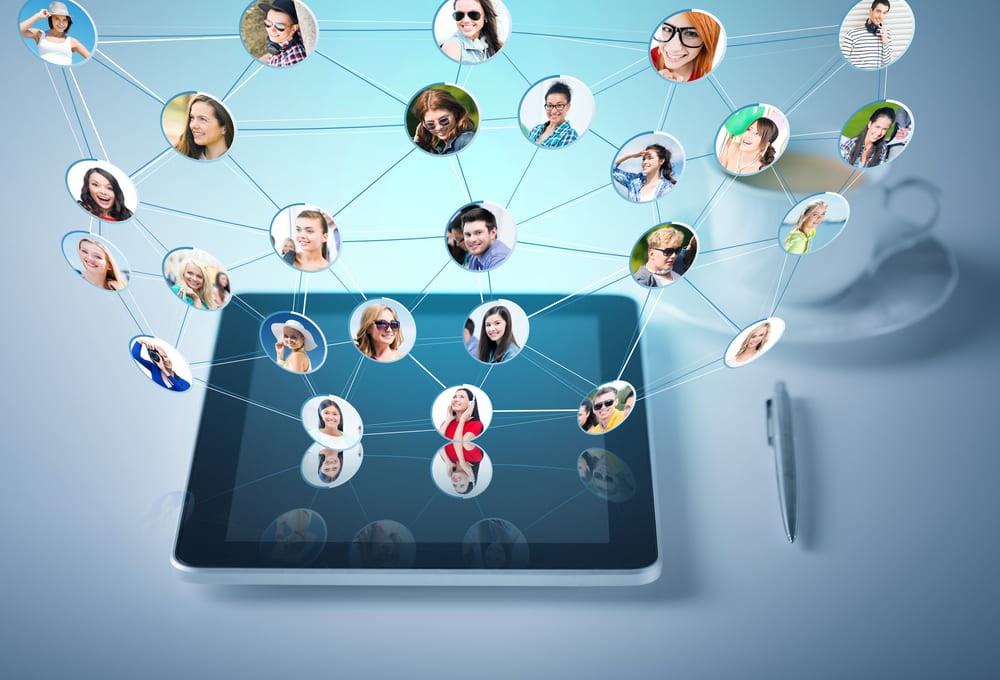 How to monetize an anonymous social network

Advertisement seems the most obvious way to monetize an anonymous app. But not so fast: remember that the users’ data is very limited. What alternatives do you have in this case?

How to get started?

The product discovery phase is the best first step you can take to lay a solid foundation for the development of your app. It includes a functional specification, UX/UI design, and a visual prototype that will give you a clear vision of the end product. On average, this phase takes 4-6 weeks.

The product discovery phase can help you:

To schedule a personal consultation with one of our project managers contact us now. 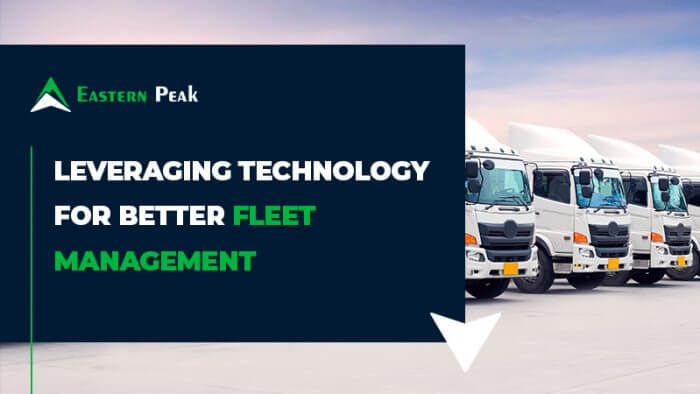 Fleet management is evolving alongside business demands across all industries. Any enterprise that owns automotive assets now needs the best ... 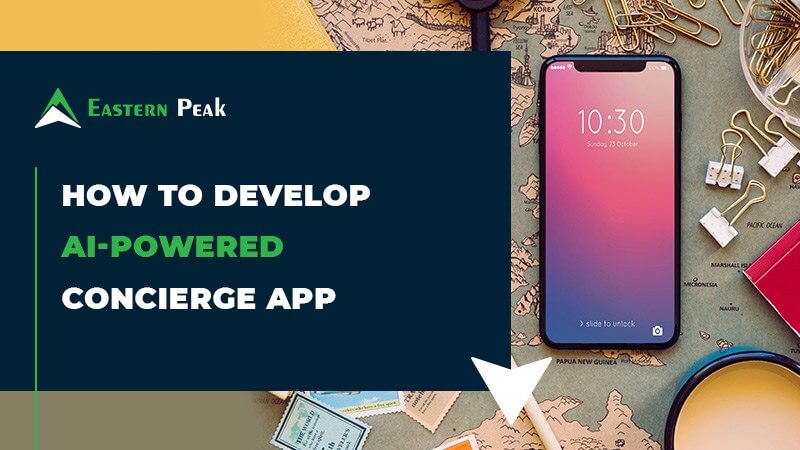 How to Develop AI-Powered Concierge App: Best Practices and Examples

The article was updated on January 06, 2021. Modern consumers prioritize convenience and speed above all. This is the main ...