Building Smart Cities – Are We Future-Ready?

Technologies have dramatically reshaped our daily lives in the recent years. Our communication with coworkers and peers, job search and even the way we shop depend heavily on our ability to use a broad range of software applications. Yet, the services that a city provides to its citizens have remained pretty much the same throughout the century. Moreover, the city organizational structure hasn’t changed to adapt to modern-day explosion of information.

The rise of smart cities, however, has left no one indifferent. The examples of smart city projects and their capability to leverage technologies to bring positive change to just about every aspect of city life is urging many local communities to contemplate undertaking smart city initiatives. The interest toward smart city technologies is now at its peak.

In this article we will examine the approaches to smart cities planning and challenges on the way of deploying smart city technologies, look at smart city examples and discover how the Urban Lab sandbox can facilitate smart city initiatives.

Simply put, smart city is a strategy of harnessing hi-end technologies like big data, artificial intelligence and IoT to raise the living standards of the urban citizens. Such quality of life factors include security, health, mobility, waste management, energy efficiency, water supply, IT connectivity, environmental friendliness as well as e-governance and citizen participation, and much more.

The need for smart cities is driven by the changing demographics, massive demand for core services, increasing scale and complexity of the city infrastructure as well as increased mobility and rapid dissemination of info causing hard to predict ripple effects. Now that the pressing need for change is already overdue, cities have to adapt for tomorrow’s challenges and become future-ready.

Singapore’s example is arguably the most spectacular. Hailed as the smartest city in the world this city-state is collecting data on almost every aspect of daily living and deriving insights from it to raise living standards. In 2014, a program introduced by the island republic Prime Minister has equipped the city with a multitude of cameras and sensors, tracking everything from traffic to air pollution levels.

Specifically, in transportation Singapore has become an example of using Internet of Thing for smart cities. Successfully implemented phased traffic lights, smart parking and road sensors have completely eliminated the cities road congestion problem. The city also uses cameras to monitor if anyone smokes in prohibited areas of throws garbage from high-rise buildings.

On top of that, its irrigation system has gained wide acknowledgement for addressing drought: the system uses sensors to measure ground dryness level and adjust the amount of water used by city sprinklers according to predicted levels of rain.

One of the world’s richest cities, Norwegian capital Oslo is also said to be one of the smartest cities in the world. The city is dedicated to going 95% environmentally-neutral and reducing carbon air emissions by as much as 50% by restructuring its traffic grid.

Other smart city projects deployed in Oslo include smart parking systems, automatic care for the sick and the elderly, smart lightning and a wide sensor network for traffic monitoring. The city also has an electric-vehicle charging network. All in all, Oslo has an aggressive approach to energy efficiency and sustainability, planning to dramatically minimize greenhouse effect by 2019.

When it comes to software projects, the Waterfall approach allowing for long production life-cycles and the luxury of long-term planning and preparation is simply not applicable. Software projects today call for introducing a vast amount of changes over short time spans, and putting everything, ready or not, into production. This Agile approach allowing for early population-scale deployment is common in large city projects. 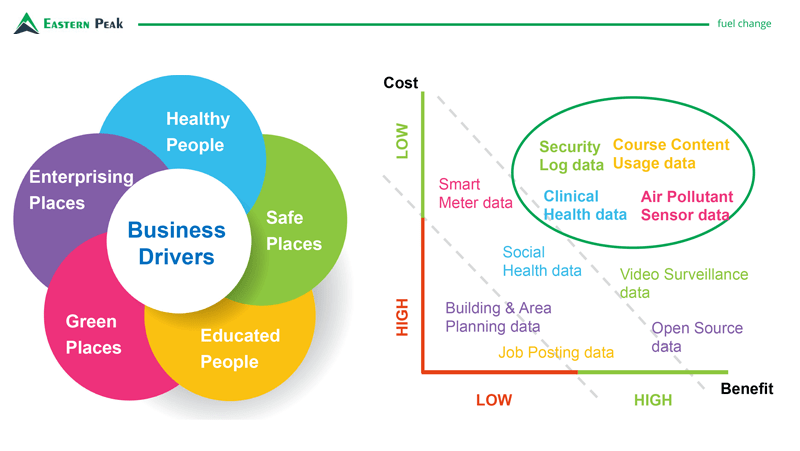 This is why becoming a smart city is not just an outside change: it also requires substantial changes from the inside. The city authorities need to start behaving like a software accelerator providing a “playground” for huge amount of technologies transforming the way the city services are provided for good.

In the traditional city services there is always a planning phase and a lot of thought and effort invested in deciding on the best way to implement a certain project, like, for example, creating a city building blueprint.

The paradox is that when dealing with technology it seems that there is no planning and the implemented initiatives are the ones that simply “sell” better. Most cities are not equipped to evaluate technology or to create any sensible blueprint whatsoever.

If you are contemplating smart cities initiatives, you need to choose between the two approaches:

2. Empiric: creating an urban lab that simulates the city and serves as a testbed for all initiatives before deploying them to the actual city.

At Eastern Peak we believe that the second approach is more realistic. Thus, we have created the smart city Urban Lab framework that has proven to accelerate the adaptation procedure.

Now that you have decided on how you will approach smart cities planning, the first thing you should do is define the business drivers. These business drivers should reflect the focus on the particular aspects of life a city wants to enhance to make its citizens happier, for example: healthier, safer, more educated, etc.
The business drivers will serve as a launch pad for programs targeted at implementing smart city initiatives.

For example, if you choose Healthy People as you business driver, this will let you outline the following smart city programs:

Further, you can break these programs down into multiple initiatives. Each of these initiatives will contribute to reaching previously outlined business goals and will have a cost attached to it. The best practices recommend going for quick wins, the ones that have relatively low costs and will bring high benefits.

Selecting and deploying such projects successfully will build citizens’ trust and lower their resistance to implementing more complex initiatives. 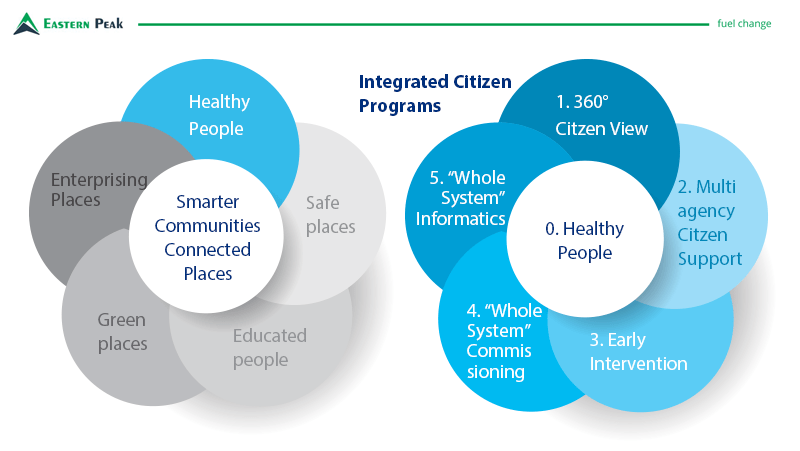 Test drive your initiatives: Use Urban Lab as proof of concept sandbox

After you have selected the “fast track“ initiatives, test them before ultimate deployment will contribute to their successful implementation. One of the most frequent smart city challenges local authorities come across is the difference between the initial idea and the subsequent implementation.

What looks good on paper will not necessarily flourish into something viable: a plethora of your city infrastructure parameters may impact the ultimate result and performance.

An Urban Lab is an Eastern Peak program meant to bridge the gap between the local proof of concept and global deployment.

This is how the Urban Lab works:

An example of this approach can be seen on one of the initiatives: Hot Home for the senior citizens which directly responds to Healthy People business driver. 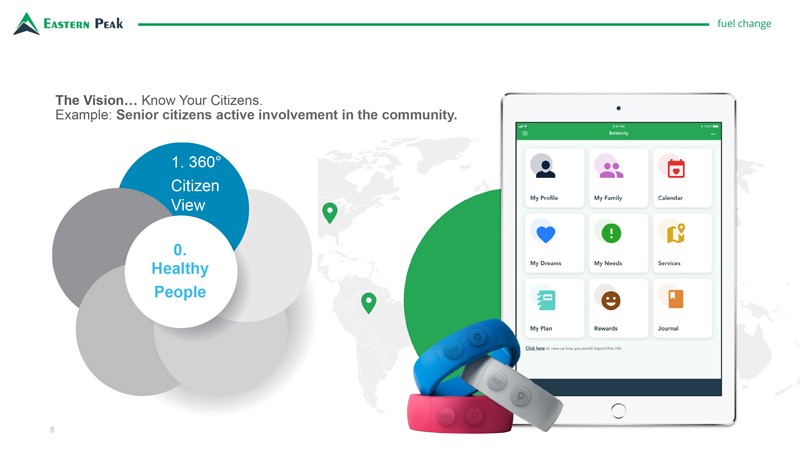 This application provides different facilities to eldery people, including social involvement and an IoT bracelet tracking. This application requires integration with many legacy systems, ie. clubs, ticketmasters etc., as well as accessible functionality. The idea was to monitor senior citizens health, instantly respond to potential  hazards, and provide them with more communication opportunities.

However, the first time it was introduced it was a failure. The elderly population did not know how to use it and most of the interfaces did not work. Only after a period of incubation in the Urban Lab the application has been launched successfully.

This powerful combination of the selection criteria for fast-track initiatives as well as putting them into the Urban Lab for test-drive significantly enhance the success factor in the large scale-deployment. Most macro-level projects are hard to reverse.

Before the city invests intellectually and financially into a project that may prove difficult to undo, they need to make sure nothing goes awry. The Urban Lab helps cities hone and refine their smart city projects to maximize the effect of their innovative initiatives.

PS. The presentation of our VP of Strategy Consulting, Paul Avrahami, from the IoT World Europe Summit at TechXLR8 – “Ensuring an effective IoT adoption in the context of Smart Cities” – you can find here.

Dr. Paul Avrahami, VP of business strategy at Eastern Peak, joined Eastern Peak in 2019. In his Role, Paul has been leading the innovation business related technological discussion with Eastern Peak’s key accounts. Currently, most of his time is spent in FSI, aligning Eastern Peak’s portfolio and market trends to customer requirements. Paul holds an experience of 25 years in the field of enterprise architecture, research and development, product management and governess of large-scale multi-national programs. 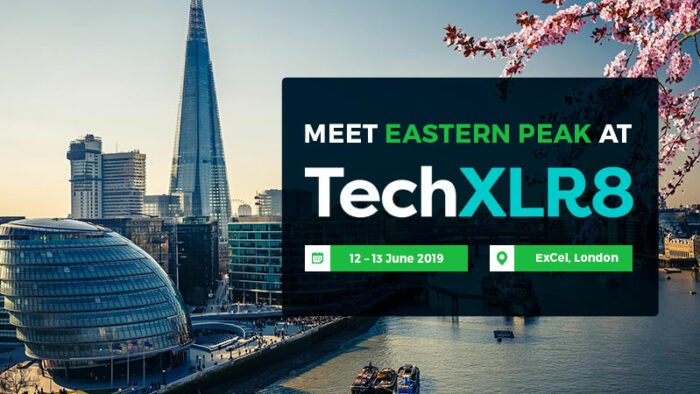 Accelerate your business transformation with technology at one of the world’s leading events – TechXLR8 this June in London! Our ... 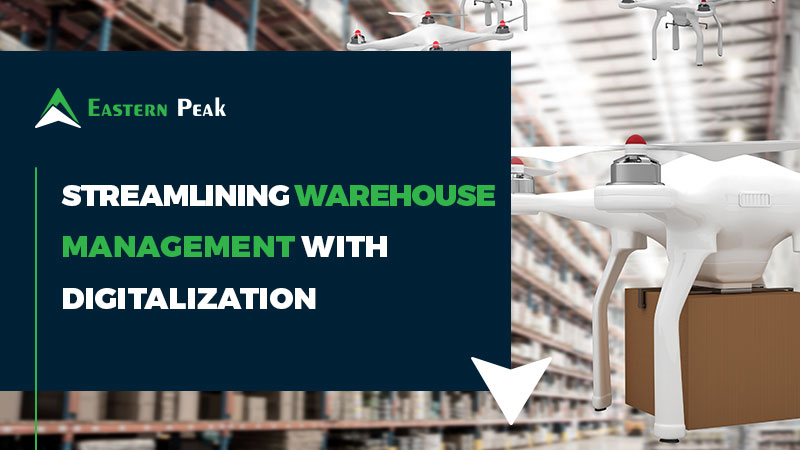 Streamlining Your Warehouse Management with Digitalization

The 4th Industrial era has brought to life many innovative technologies; as they become mainstream, clients’ expectations increase as well. ...