Android vs iOS development: Which platform should I develop for first?

Mobile app development is among the most steadily growing fields in software production. Since the surge in the number of mobile applications several years back, the demand for fast and convenient apps has been only increasing. In 2020 alone, it is estimated that users dedicate approximately 87% of the time they spend online to mobile applications.

In the wake of the COVID-19 pandemic, mobile application development has also received a huge influx of interest, as businesses were forced to move online quickly and fully. Microsoft Teams software for videoconferencing experienced a 1000% increase in users in March, hitting 2.7 billion minutes of meetings in a single day. Telehealth, education, and numerous other industries have also displayed an extreme need for mobile apps to help them adapt.

When opting for native app development, there are two primary platforms to choose from: Android and iOS. Worldwide, these are the absolute leaders on the market. Both Android and iOS present incredible development options, and it’s necessary to take a good look at an in-depth iOS vs. Android comparison before making the decision.

In this article, we’ll give you an overview of the perks and perils of both these platforms and pinpoint their primary differences to help you make the best choice for your company.

The benefits of developing for Android

Flexibility. Generally, Android presents a much less restricted environment than iOS. In terms of distribution, these apps will run on virtually any Android device, and you are unlikely to encounter any issues with hardware compatibility. The development process is also more flexible for Android.

This platform also enables a smoother development experience by relying on Java. Java is an extremely versatile programming language that Windows, Mac OS, and Linux all support, allowing developers to build Android apps regardless of the OS their machine runs on.

Publishing the app. As of 2020, Google has become less lenient towards apps that developers want to post on Google Play. The review process that used to be done automatically within seven hours now may take up to a week for new developers. Despite this novelty, however, the majority of Android apps that don’t violate the company’s content policy get approved. Developers also have to pay a fairly low one-time registration fee of $25.

Going beyond smartphones. Developing Android apps means building software for an entire ecosystem of devices. You can extend your app’s functionality so it runs on Daydream and Cardboard VR headsets, Android Things, Wear OS devices, Android Auto, and several other platforms. While this flexibility can create design issues, it also grants you the power to integrate your app into users’ cars, TVs, and smartwatches in addition to phones.

The drawbacks of Android development

Quality assurance. The fragmentation can be extremely beneficial, allowing you to develop for multiple Android platforms simultaneously, but it makes testing extremely complicated. Even in the simplest apps, developers frequently have to deliver fixes just because the majority of users stick to the older versions of the operating system instead of updating it when updates are available.

Cost. Developing for Android is normally more time-consuming than for iOS. The costs increase respectively, both in development and subsequent quality assurance.

Users spend less inside the app. Android users tend to favor free apps, and they also spend less on in-app purchases than iOS users do.

Possible security issues. Android is an open-source platform, and it has a higher chance of falling victim to cyberattacks than the much more closed-off iOS counterpart. 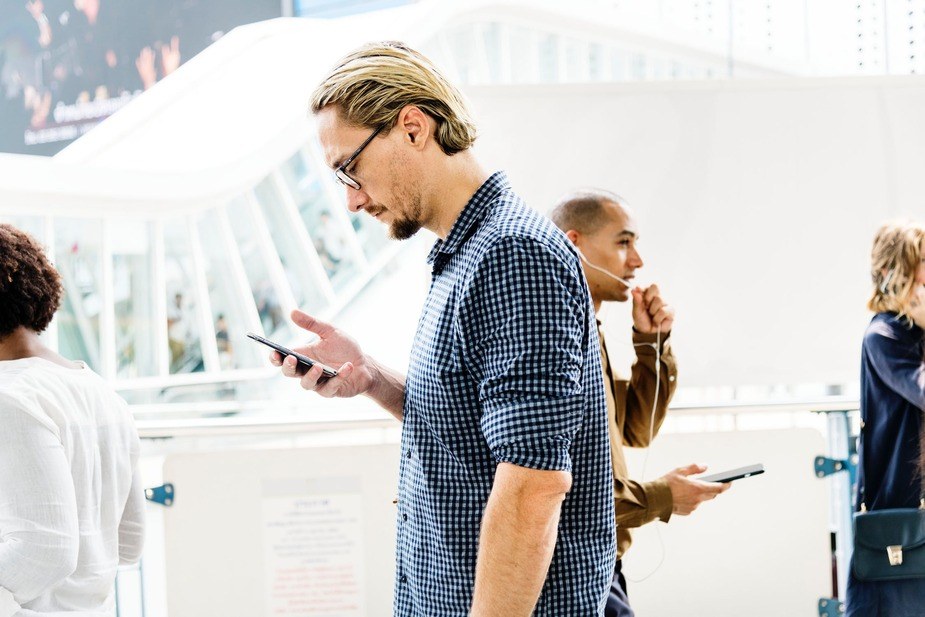 The advantages of iOS development

Performance. iOS mobile app development is in such high demand because these applications always perform extremely well. This platform is fast, reliable, and easy-to-use, with few bugs remaining in the final build of any app.

Creating an Apple ecosystem. As far as the pros and cons of iOS app development go, this point may belong to either category. On the one hand, having just one piece—for instance, a smartphone—that runs such a secluded OS is inconvenient for users, as it may be difficult to transfer files from one device to another. On the other hand, working with this family of operating systems allows developers to build for a whole ecosystem of devices, rather than for targeted phones only.

Sleek and flawless UI/UX. Apple provides developers with detailed guidelines for the creation of a user interface for their apps. While it may be limiting to some, this approach generally ensures an exceptional user experience.

The downsides of building for iOS

Rigid development environment requirements. For native iOS development, developers need software, such as XCode, that only runs on Mac. Therefore, to develop for iOS smartphones, you will need at least one other piece of Apple technology.

App release. The Apple App Store is typically more demanding than Google Play. Even if your app doesn’t break any rules, it can still be rejected if it’s not relevant or useful enough.

Customization. iOS restricts your ability to customize the app’s interface. Also, it may be difficult to add some features if they require interaction with third-party software.

Android devices are now holding 74.4% of the global market share, which makes the future of Android app development extremely promising. iOS devices are getting cheaper and gaining more and more popularity due to their high performance and constant innovation. Overall, it’s not productive to base your iOS vs. Android app development choices on the future outlook since both platforms will not lose popularity within the next few years. 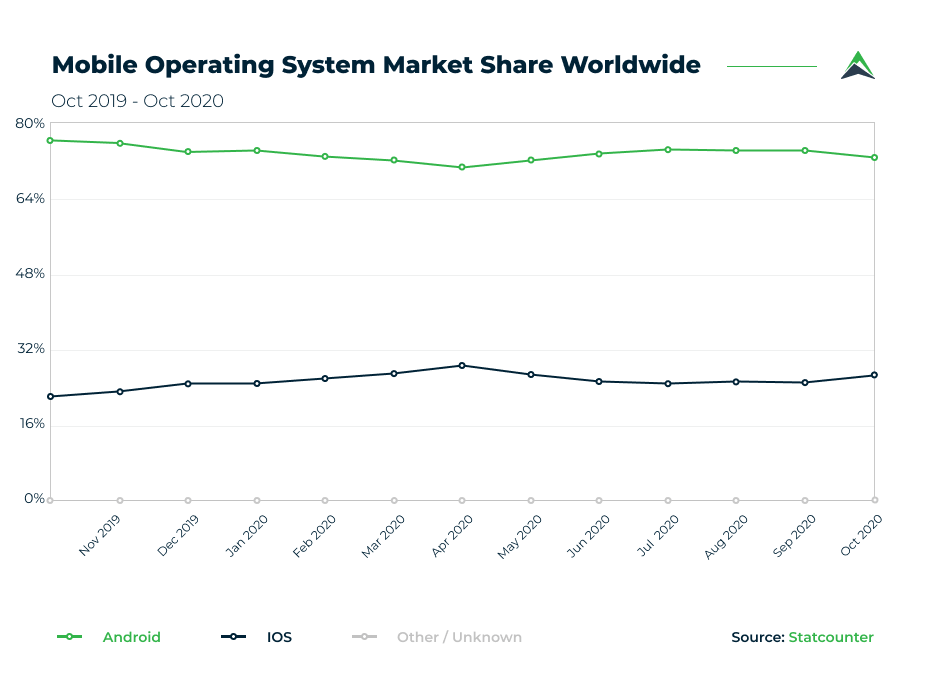 While Android is the absolute leader in terms of the market share, users who prefer iOS have a higher lifetime value (LTV). It means that these customers are more prone to spending money inside the app to buy additional content and become a long-standing—rather than a one-time—source of revenue. While there is no clear winner in the Android vs. iOS development revenue competition, experts predict the overall in-app user spending to reach $60 billion for the iOS App Store in the following year.

If you’re planning to create a retail app or an app that offers extensive additional content that a user can buy, iOS will grant you more opportunities to make a profit.

Read also: How Do Free Apps Make Money? The Most Popular Revenue Models

To identify your target audience, you should consider the planned features for the app first. However, there are also some inherent distinctions between iOS and Android users, and you can leverage them when making a decision.

Statistics show that developing apps for Android may be more successful if your target audience is mainly in technical or medical fields. iPhones are more popular among business professionals, managers, and sales experts. Also, on average, people who prefer iPhones tend to hold higher degrees, strive to keep up with the latest technology trends, and have a higher household income.

Budget for development and deadlines

For now, iOS remains the winner in the Android vs. iOS app development contest in terms of development time and the required budget. The coding languages that the two platforms use become a significant factor.

Android relies on Java, while iOS uses Apple’s native programming language, Swift. Swift frequently appears to be more convenient and tailored to the needs of iOS developers. This reduces the time spent on coding, hence cutting the costs.

Also, unlike Android, iOS is not an open-source platform, and it pushes significantly more standardization for the featured software to ensure the appropriate and smooth functioning of the app on all devices it’s built for. The provided information saves time during the development and reduces the future expenses on bug fixes.

Android users frequently stick with older versions of the OS. In fact, as much as 50% of all Android devices are currently running outdated versions of Android, resulting in crashes and unexpected bugs in new apps that are otherwise perfectly functional. This problem is much less pronounced in iPhone users, meaning the maintenance for iOS apps is generally cheaper than for Android software.

The most notable difference between iOS and Android is how open Android is compared to iOS. The former is an open-source operating system. For developers, it means gaining access to the hardware, file systems, and features that are off-limits in iOS. Android is also more friendly in terms of customization.

Note: iOS is generally perceived as a more secure system due to the closed-off approach Apple maintains. Android apps might be more susceptible to corruption and cyberattacks.

iOS app development may be more profitable if your target audience resides in Western Europe, Australia, or North America. The market share of iOS outweighs Android in Japan and the U.S., and it comes close in the United Kingdom.

Android has more global coverage, and it appeals to users in Latin America, Africa, and some parts of Europe. The market share of this platform beats iOS by a large margin in Germany, China, Brazil, Nigeria, and India. 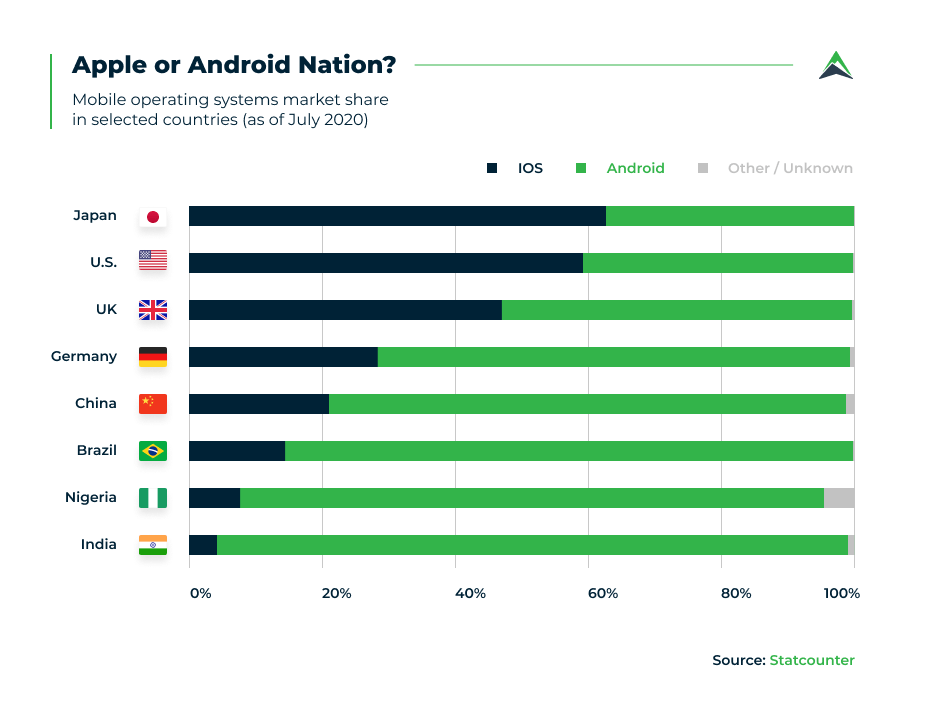 In the Android versus iOS comparison, Android is currently a more accessible platform. Although the review process in 2020 takes longer than it did a few years ago, Google Play still accepts the majority of submitted apps. If you uphold all of the company’s policy guidelines, the store is highly likely to eventually display your application.

The Apple App Store is more selective towards the apps it allows on the store. The review process is currently somewhat faster, with just two days for the majority of apps, but the possibility of getting rejected is higher with Apple.

Also, with Google, developers only need to pay the initial fee of $25 to start putting their apps on the store, unlike the yearly $99 fee with Apple’s App Store.

Although choosing the right platform is a vital decision, keep in mind that your app will most likely do well on either of the discussed systems. Consider your options carefully but avoid stalling the development process too much by overthinking this choice.

Most customers are used to just one specific platform, therefore, it’s entirely possible to successfully hit the market without creating a separate build of the app for multiple systems. Also, post-release maintenance for two platforms is significantly more expensive and time-consuming than for a single codebase. Bugs, updates, and regular changes are all inevitable after the initial release. Delivering fixes is easier for one platform.

It’s much easier to start with just one platform. You can create a working prototype, introduce it to the market, and wait for feedback from your first customers. Depending on what insights you gain, you can start planning the expansion to another platform or consider developing a cross-platform app instead.

So which platform to choose first?

When deciding between iOS or Android development, consider the following factors:

Although there are many more Android vs. iOS development differences, this list covers the most critical points when picking the initial platform for your application. Overall, both operating systems dominate the market, have a good future outlook, and appeal to extremely large audiences in all fields.

With two platforms walking so tightly in lockstep, distinguishing which one is right for you can be difficult and time-consuming. At Eastern Peak, we have extensive expertise in delivering custom mobile solutions that correspond to the smallest specifics of our clients’ businesses. Contact us today to get a free consultation and bring your mobile app idea to life. 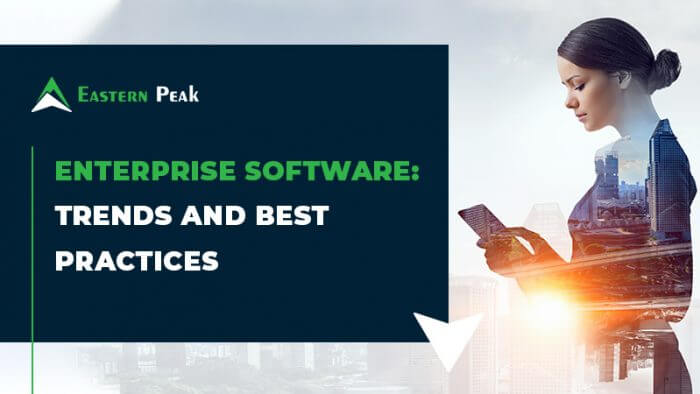 Businesses in the year of 2020 are facing increasingly complex challenges that are impossible to overcome without technology. With the ... 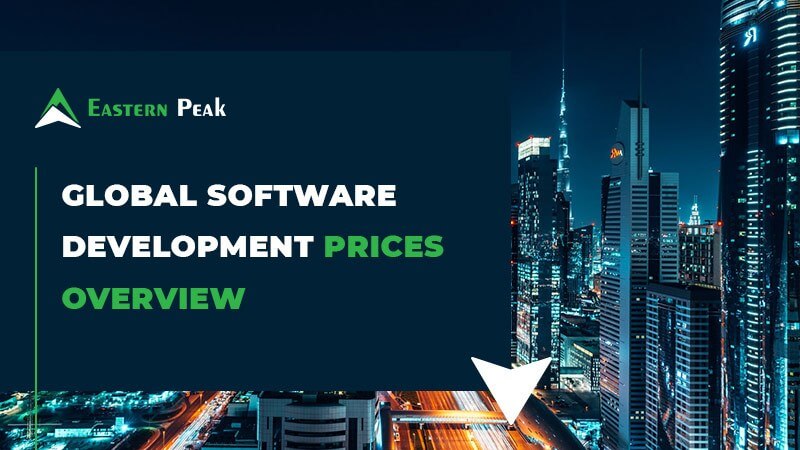 Global software development prices overview: How much does it cost to hire good offshore developers?

The article was updated on November 25, 2020. Depending on where you reside, the local rates for software development can ...